A toxic atmosphere: Kirkuk’s access to clean air is cut off

Nishtiman Ramazan, a teacher in Kirkuk, lives with her parents. Each day, the family is awakened by the smoke from the oil fields; the soot and the intense heat of the fire reaches their home. This has impacted the health of the family: Nishtiman’s father has had difficulty breathing for four years.

“Our house, yard, and roof are constantly getting dirty from the soot. We cannot hang our clothes out to dry. If we clean the house in the morning, it smells smoke again in the evening.”

Nishtiman is 35 and has been living in Latifawa neighborhood for 16 years. She and her family are several hundred meters from an oilfield and the fire is visible from their house.

Nishtiman’s father suffers from shortness of breath. She tells us that her uncle’s family lives even closer to the field and they have difficulty breathing, although the family has reported no previous history of respiratory problems.

Nishtiman’s father is visiting a physician in Sulaymaniyah city and he depends on medications to maintain his health.

She fears that living in this environment may lead to cancer and other chronic diseases. “Here, every disease is possible; we are living in smoke,” said Nishtiman.

Black smog hovers constantly over the Kirkuk skyline. The families living near the oilfields inhale poisonous smoke; they have not breathed in clean air for years.

Asthma, difficulty breathing, and cancer are common medical conditions among residents of Kirkuk. Peregraf’s correspondent visited neighborhoods located near the oilfields and discovered that the locals have not questioned the causes of their conditions.

The smoke hovering over the city is composed of a mixture of gases discharged from the burning oil. Some of the gases, such as methane, are toxic and can be dangerous in high concentrations. Over the past decade, methane omissions, which lead to climate change and global warming, have reached their highest levels.

According to Peregraf’s investigation, the most common complaints in the public hospitals’ emergency rooms are shortness of breath and respiratory problems.

Astera Ahmed, a nurse in the emergency ward of Azadi Hospital, says that the hospital treats hundreds of patients with respiratory problems and most of them have asthma.

The Babagurgur, Jambur, Khabaza, Bai Hassan and Havana oilfields are the sources of the oil that has been extracted from Kirkuk for decades and that is clouding the city’s atmosphere with a layer of black, toxic smog.

The Kirkuk Environmental Department has three air quality monitoring stations in Eamal Shabi, Taza Khurmatu and Laylan areas. Based on testing at these stations, Mahmud Fatih, the department’s director, says none of the gases omitted into the city’s atmosphere have passed the standard threshold for toxicity. But doctors, environmental activists, and health statistics tell a different story.

Mahmud Fatih told Peregraf: “Throughout the month, we perform three functions: we monitor big companies such as cement companies, gas companies, and oil companies. These are the three studies we need to conduct monthly.”

He added, “We have examined the soil, water, and air in the areas around the factories and we found no abnormalities.”

However, just in Kirkuk’s oil fields and refineries, 900 million cubic meters of natural gas is burnt and mixed with the city’s air each day.

The statistics from the cancer hospital show dangerous results that raise questions about the information provided by the Director of Environmental Department. According to statistics from Kirkuk Cancer Hospital, a copy of which was given to Peregraf, the rates of cancer and other diseases are increasing. 1,920 cases of cancer and blood diseases were recorded in 2019 alone. In 2017, the number was 869 and the following year it surpassed 1,000.

In the first three months of this year, 399 people visited the hospital and 162 of them were admitted as new patients. 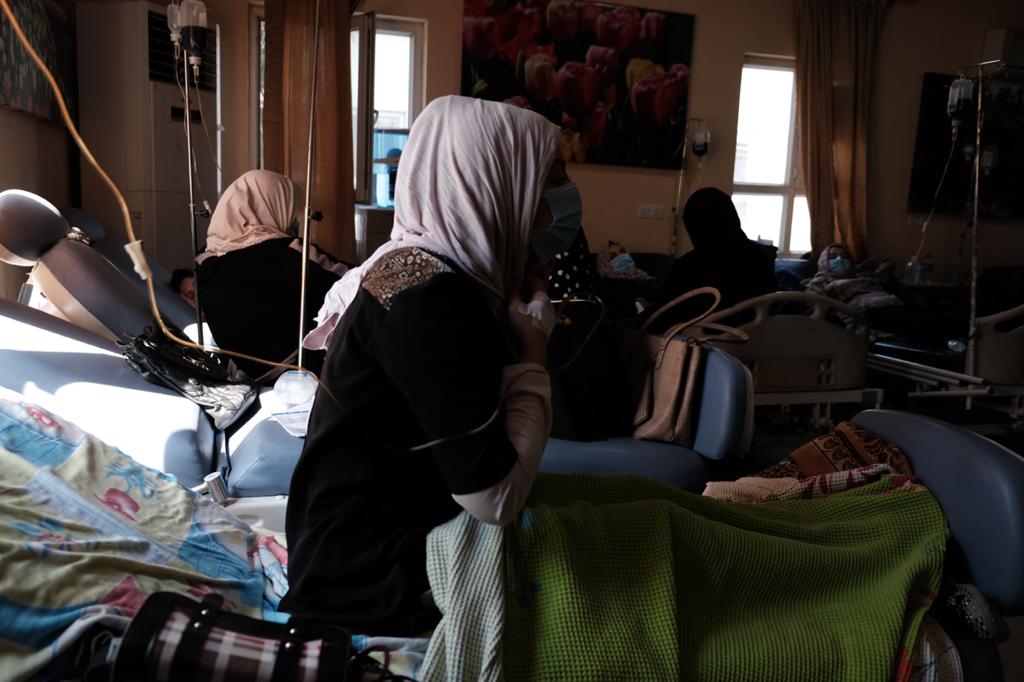 Dr. Nyaz Ahmed, the director of the cancer hospital in Kirkuk, confirms that the reason for the increase in cancer rates is “Kirkuk’s air pollution.”

The physician explained that the oil companies and the smoke from the factories “account for the increase in disease rates.” He told Peregraf, “Kirkuk’s air has adverse effects on people’s health and is indirectly linked to cancer.”

Based on his experience, Dr. Nyaz says, “I found that most of the people infected with lung cancer are either are employees of oil and gas companies or they reside in the neighborhoods around the oilfields.”

The Environmental Department conceals the danger, she explains, “to prevent the spread of panic among the people.”

She added, “After Iraq’s liberation, we have been putting pressure and have imposed some regulations on oil companies, but due to recent political tensions, we have not managed to keep up the pressure.”

Methane gas: enemy of the environment

Iraq’s oil comprises 3% of the earth’s oil reserves and is the source of 8% of the earth’s methane omissions. According to experts, Iraq can earn $1.5 billion by recycling the gas. Kirkuk bears a significant portion of the burden from these gas emissions.

The gas burnt in Kirkuk is a blend that contains methane, propane, butane, and sulphur. Farhad Hamza, head engineer at North Oil Company (NOC), says: “All the gases are poisonous. Hydrogen sulfide, in particular, can be fatal if its amount in the air increases.”

Farhad Hamza thinks that at this stage, Iraq cannot recycle the gases emitted from oilfields.

NOC still uses antiquated machinery that does not work properly and therefore, releases a significant amount of gas into the atmosphere.

Petrodollars: compensation for the damages

In 2012, the Iraqi Oil Ministry allocated 17 billion IQD to a restoration fund for environmental damage in Kirkuk. However, these funds were combined with the governorate’s other income and was used for maintaining roads and bridges. This led to pretests by environment activists who thought the budget should have been spent on expanding green spaces, cleaning up the city, and treating cancer patients.

Farhad Hamza said that Kirkuk’s lack of public services has made it necessary to spend the budget in this manner.

Meanwhile, the center for treating cancer patients has obtained some of its equipment through “charity”, and is overwhelmed with patients who cannot afford to go to another city or country for more advanced treatment.

Dr. Niyaz Ahmad, the director of the Kirkuk Cancer Hospital believes that the budget provided through petrodollar system should have been spent to compensate for the damage that the oilfields have inflicted.

“Instead of construction on roads and bridges, the money should have been spent on building a green belt for the city and treating cancer patients and victims of environmental pollution. Many patients have died as a result of officials’ negligence. We record around 2,000 patients annually.”

Green space comprises less than 4% of the land in Kirkuk City. According to global standards, a city’s green space should meet or exceed 15% of its total area.

Dr. Ahmad states that Kirkuk does not have a radiology clinic, which costs only $8 million. He asks, “Does this city not deserve to have its own X-ray center?”

In 2009, the Law no. 27 for the Protection and Improvement of the Environment was passed. Article 7 provides: “Any company, while undertaking oil exploration and work in the fields, must abide by the principles of protecting Iraq’s water, air and soil and refrain from polluting them. Companies in violation [of these principles] shall be warned and shut down for 30 days and this period will be extended until violations are corrected.”

With regards to the NOC’s plans for environmental recovery in Kirkuk, Farhad Hamza said, “I do not know of such any plan, and I do not believe there is such a plan because of the financial situation of the Iraqi government, and [decline in] oil prices does not help.”

Advocates for the cancer hospital and environmental activists are searching for a solution to the pollution issue, but they say political tensions have impaired their efforts so far.

Dr. Nyaz says, “I cannot do anything alone. One person cannot do much. Activists, lawyers, and journalists must join together to demand compensation for the damage that has been inflicted on Kirkuk.”

Shkofa Sallaiy says, “Now political tensions do not allow us to take any steps. The only thing we can do is to increase pressure; we cannot implement a comprehensive solution. Now, we can only try to provide the cancer hospital with tools it needs and to expand green areas to prevent this harm.”

Controversy over pollution in Kirkuk coincides with the anguish of hundreds of people suffering from chronic diseases. Ali Fikrat is 22 years old and was diagnosed with cancer four months ago while he was preparing for his university graduation ceremony.

Ali’s mother Gulisan Saed has been suffering from respiratory problems and sometimes has to use an inhaler. Despite her despair over her son’s diagnosis, she has searched for the causes of his disease and was told by physicians that gasoline fumes or poisonous smoke may have produced toxins in his blood.

Ali sits silently on his bed next to her mother’s chair. The family resides in Domiz neighborhood and Ali visits the cancer hospital with his mother every other day. Their only income is the pension left to them following Ali’s father’s death. The medicines are so expensive that it is impossible for the family to afford them without help.

The doctors have told Ali’s mother, “Perhaps the reason [he developed cancer] is that Ali worked at a gasoline station and the fumes affected him.”

But Gulisan says that he only worked at the gasoline station for a short period of time and he was mostly busy with school.

Gulisan suspects that her son might have developed cancer as a result of the teargas he was exposed to in last October’s protests in Baghdad when Ali went to support the demonstrations.

During this investigation, Peregraf has tried several times to reach Kirkuk’s health officials, but they were not prepared to comment.

This investigative report was written by Tara AbdulAziz for Peregraf as part of the Intensive Journalism Workshop funded by the German Foreign Office.