Iraqi society prefers women to go into teaching and similar professions and there is poor gender balance in Iraqi ministries.

I once asked one of my relatives: “Why did all four of your daughters become teachers?” My relative replied: “For several reasons. Firstly, teaching is more appropriate for women. Secondly, teaching has fewer working hours compared to other jobs. Thirdly, teachers have three to four months of vacation and that is very advantageous for women. The fourth and final reason is they do not interact with men.”

We regularly hear such sentiments among families opposed to women entering certain professions, like engineering, accounting, the armed forces, or tourism. Data collected by the Ministry of Planning in 2018 confirmed as much, indicating Iraqi society broadly prefers women to go into teaching and similar professions.

The rate of female employment in various professional sectors is imbalanced. For example, 72% of all female public sector employees work for the Ministry of Education. 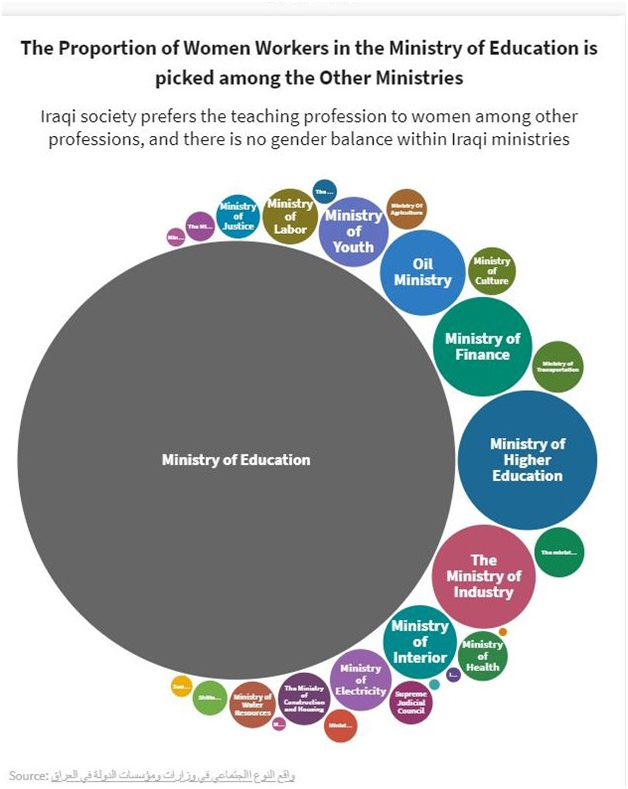 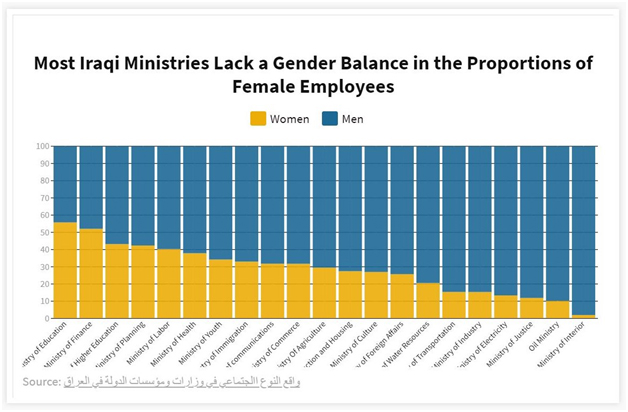 Women make up more than half of all employees in the Ministry of Education and about half in the Ministry of Higher Education. There are two main reasons why the teaching profession is overwhelmingly staffed by women. Firstly, Iraqi society tends to view teaching as more closely resembling women’s traditional role in raising children. Secondly, in recent decades, the Iraqi government has actively encouraged young women to consider teaching by opening several training institutes where the duration of study is just two years. In short, teaching is among the easiest professions to enter.

During my work as a lecturer, I once held a discussion with a female colleague about the possibility of a woman becoming president of the university. I was surprised by my friend’s response. “She would fail, for sure,” she said. “But why?” I asked. “Because such an important position cannot be run by a woman,” she replied.

This statement seemed to encapsulate the Iraqi society’s perception of women. If a university lecturer held such beliefs, what must the rest of society think?

Data issued by the Iraqi Ministry of Planning for the year 2018 demonstrated the scarcity of women in administrative positions. It showed there is just one woman employed as a general manager compared to nine men. The same goes for the assistant general manager. The proportion of women employed in the administration of the Ministry of Education is lower than 10%. Although the ministry has achieved a gender balance overall, it has failed to reflect this in positions of administrative authority.

The Ministry of Higher Education has also achieved gender balance, with a roughly 50:50 distribution of departments. The Ministry of Interior meanwhile is the worst performer for overall female employment and access to administrative opportunities. The Ministries of Health, Youth, and Immigration have also failed to achieve gender balance in senior management positions. 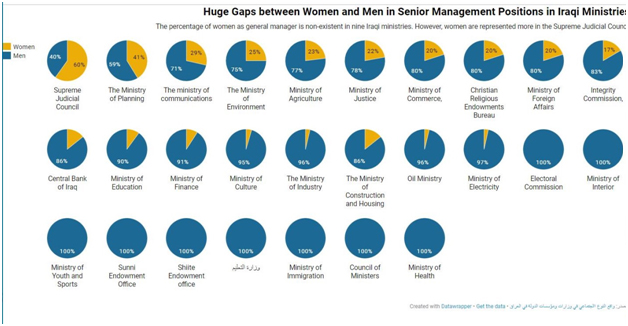 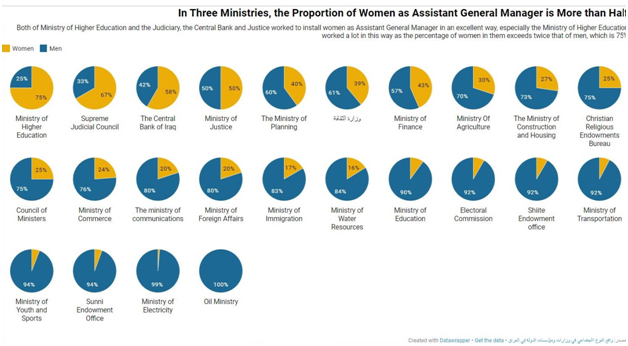 Other Iraqi ministries and bodies have been less successful, with no general manager or assistant general manager positions held by women. For example, there are no female directors in the Ministries of Immigration, Cabinet, Interior, Sunni Endowment, Shi’ite Endowment, High Commission, Higher Education, Health, Youth, and Sports. Likewise, there are no female assistant general managers employed by the Ministries of Industry, Environment, Oil, Interior, Health, or the Integrity Commission.

According to the number of employees of both sexes, there are equal opportunities for training across Iraqi ministries. Also, an increase in educational attainment among female employees has been observed.

Training is an important part of promoting gender balance and the advancement of women. This will be achieved by boosting opportunities for women to increase their skills, refine their expertise, and raise their level of performance. According to data from the Ministry of Planning’s Central Bureau of Statistics for the year 2018, the number of female employees attending conferences and external courses was less than a third of the number of men; three women to every seven men. However, more women participated in internal ministry courses, with male attendance standing at approximately 10% and female attendance at approximately 11%. Thus, the gender gap tends to favor women. Also, for external courses, the participation rate for both male and female employees is 1% of the total of each. As a result, we find equal opportunities for both sexes.

As for educational achievement, more than 40% of women employed by all Iraqi ministries hold a degree. 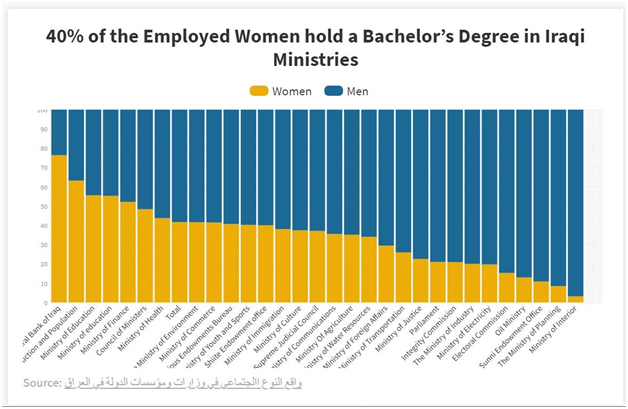 In a survey conducted by the Ministry of Planning’s Central Bureau of Statistics, it was found that the educational attainment of men is almost twice that of women. However, when studying the relative distribution of educational attainment, we notice there are a greater number of illiterate male employees and those with just a primary certificate working in Iraqi ministries than women - approximately 11%. Meanwhile, around 40% of women within all ministries hold a bachelor’s, master’s, or doctorate. In some ministries, more than half of female employees hold a bachelor's and diploma degrees, such as the Central Bank and the ministries of Construction, Housing, and Education. 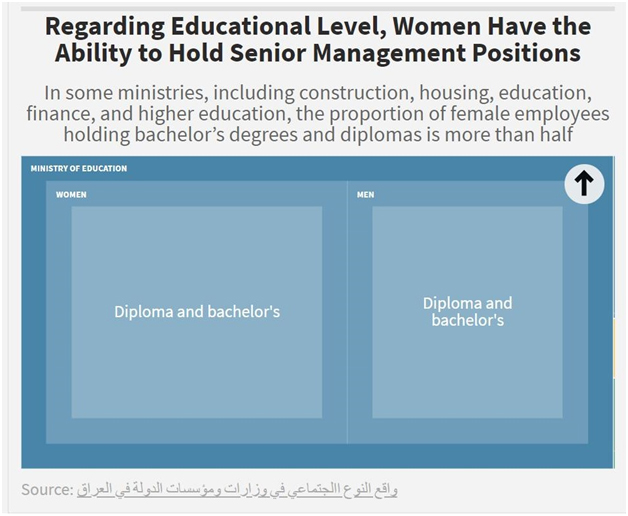 To find more practical solution to this problem, in this journalistic story, I have interviewed three successful, experienced women in senior management positions. They started their lives very activity, all of them consider themselves activists and advocate for women to take their rights.

Amal Jalal, a member of the Supreme Council for Women's Affairs in the Kurdistan Region of Iraq, in a recent interview told me that the primary reason for female exclusion from senior management positions is the nature of Iraqi society itself and its perception of the role of women. In order to improve the gender balance, we must start with practical solutions and applications within ministries themselves. For example, the Iraqi government should guarantee the representation of women under the constitution, similar to its 25% quota of seats reserved for women in parliament. The state must set such a quota for women in the public and private sectors. Under the Labor Law, we can push employers to take women’s representation into account.

Amal also said we should work to qualify women through participation in training courses. The lack of female access to managerial positions is often due to a lack of experience.

As for Bayan Nuri's statement, the former Minister of Women's Affairs in Iraq, there are several reasons that prevent women from reaching managerial positions, but here I only refer on two of them because I believe they are most important. The first is the lack of support and encouragement for women by society, and the second is the woman's lack of self-motivation. To overcome the unwillingness of women to assume managerial positions, we should support them psychologically and socially. In fact, we have a large number of women who have bachelors, master’s or even PhDs degrees. They have the same qualifications as a man to take managerial positions, but the two reasons I mentioned mostly prevent them. So, I believe that the problem is not the resulted from a lack of experience or competencies, but of a lack of motivation.

In another interview, Dr. Bekhal Abubakr, a university lecturer at Sulaymaniyah University and a former secretary for a women's organization, said, the limited participation of women in administrative positions indicates several factors from a social perspective. Basically, it belongs to the viewpoints of societies to the role and status of women in the various aspects of life. The common view in most eastern communities about the most prominent status of women is their houses. This issue belongs to misunderstanding or false practicing of some social and religious traditions. Another obstacle involves the logistic necessities of women participation, which are not always provided by authorities such as suitable nurseries, kindergartens, safe employing environment, and job opportunities. Finally, women's awareness of their fundamental societal role is another important point that enhances their initiation and active participation in the management and administrative positions. Thus, they can prove themselves and reinforce their time management, self-esteem, and achievement.

What can be done to achieve gender balance in Iraqi ministries?

In order to achieve gender equality across Iraqi ministries, the government needs to employ around one million more women to raise their overall representation above the current 28%. The ministries also need to install 855 women in senior management positions.

There are three measures that can increase the possibility of women reaching higher administrative positions: numbers, scientific qualifications, and opportunities.

First, in terms of numbers, there are some ministries, such as the ministries of education and finance, where women are more likely to hold senior posts than men. By comparison, the ministries of interior and planning promote far fewer women.

Secondly, in terms of scientific qualifications, it is possible for women to obtain senior management positions in these ministries and government bodies, such as Central Bank, Construction and Housing, Education, Finance, Higher Education. Women in these ministries make up more than half of all employees. Their numbers are especially high in the Central Bank and the reconstruction ministry. Meanwhile, access to senior management in the ministries of interior and oil for instance is very low.

Thirdly, with regards to giving women senior management opportunities, the Judicial and Education Councils have strong track records, with 63% and 50% of senior posts held by women respectively. By contrast, the Ministry of Health's opportunities for women is very remote.

Sources
The data are taken from:

The Iraqi Planning Department, Department of Human Development, Central Bureau of Statistics, 2018. The Reality of Gender in the Development of the State in Iraq.